The Nature of Chemistry

Answers and suggestions for the NOC-based activities 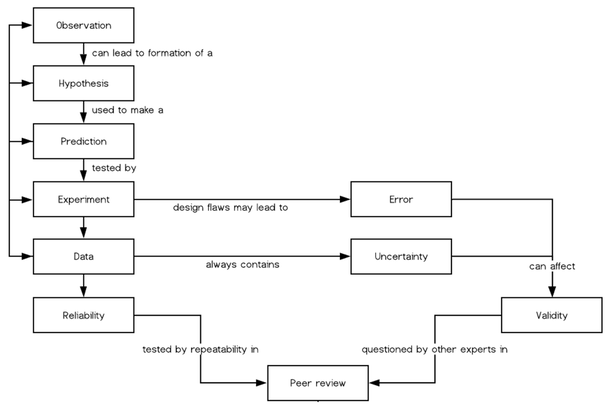 Activity 1 - Tricky tracks
Teacher guidance can be found in the RSC document here.
Activity 2 - Mystery machine​
Questions to discuss:
1. How did you identify the patterns? (lead to understanding of inductive reason as specific data → general pattern; underlying assumption that there is a pattern)
2. Was their prediction accurate?
3. How certain can they be? How could they increase their certainty? (repeating with the same and other shapes)
4. Can we ever be 100% certain? (not without an infinite amount of data)

Activity 1 - Mystery boxExtension: When we are dealing with the sub-micro level understanding, we cannot 'see' things with our eyes so must depend on modelling or other forms of indirect 'seeing' such as x-ray scans to know something.
​
Activity 2 - Modelling the atom
​1a.
a. The earliest model of the atom is of a single, solid balls as the smallest possible units of matter. Possibly put forward by Democritus.
b. The plum pudding model describes the atom as a number of negative electrons stuck in a larger, positively-charged ball.
c. Rutherford suggested that electrons are orbiting a small, dense, positively-charged nucleus.
d. Bohr's model places electrons in quantifiable energy levels around the nucleus.
e. The cloud model suggests that electrons are found in probability clouds of different shapes around the nucleus.

1b.
Observation 1: Model a's simplicity would be very useful here as solid balls of matter would surely not be able to pass through one another. With some understanding of electrostatic repulsion, the other models might also help explain the phenomenon.
Observation 2: This observation would require a model which identifies electrons as independent particles. Perhaps models b, c and d would be most useful.
Inference 1: This inference (made by Rutherford) requires a model with a significant portion of empty space. Perhaps models c, d and e would be most useful.
Inference 2: This inference (made by Bohr) requires a model that has clear and quantifiable energy levels such as d and possibly c​ depending on the description of the orbits.

Activity 1: Phlogiston theory
1a. Possible deductions: 1b. i. The data shows that a metal increases in mass when burnt in air. This is the opposite observation that we would expect when applying phlogiston theory. It is counter-evidence.
ii. Increasing evidence that opposes a theory would decrease its validity.
iii. The demo shows that when a candle is burning, the volume of gas in the container decreases. This causes the liquid level to rise. Phlogiston theory suggests the air absorbs phlogiston when an object is burning but does not identify whether phlogiston possesses a volume. Therefore, technically, the demo does not support or oppose the theory.
1c. i. A paradigm shift in the natural sciences is a complete change in the way we approach or understand the natural world. In this case, our understanding of combustion shifted dramatically from a substance losing an element (phlogiston) to the surrounding air, to a substance combining with oxygen from the air.
ii. In a similar manner, flat-earth theory became redundant as we obtained new contradictory evidence that pointed towards a different explanation. Eventually, round earth theory was proposed to fit this new evidence.
iii. A valid theory must be supported by empirical evidence. The more supporting evidence, the more valid the theory. A theory always has the potential to be replaced. If we begin to find contradictory evidence then we have to reconsider our explanation.
iv.
Activity 2: Paradigm shifts in atomic theory
There is no correct order here. The focus is just to highlight some of the factors that can cause a paradigm shift. (In the context of atomic theory, I might put technology at the top given that without those advances, even the most brilliant of geniuses would not have been able to hypothesise the consequent models)

Activity 1: What causes the Sun to rise?
1. Is he correct? No (certainly not according to all the other evidence we have).
​2. What kind of logic is he using - inductive or deductive? Inductive logic - this is identification of a pattern from many single pieces of data.
3. His daughter wants to scientifically investigate this claim. How might she do it? The independent variable she would need to change is the rooster's noise - so perhaps she could place the rooster in a soundproof box for a number of mornings and record her observations of the sunrise. She would need to control other variables such as the position of the rooster to ensure a fair test.
4. Challenging​: What does this example suggest about the temporal relationship between cause and effect? One thing happening after another is often an indication of a causal relationship but we must be careful to investigate those claims to ensure that it is.

​Bias and the role of humans in science

Activity 1 - Ego and lies
This real-life example might provoke thinking around other motivators of scientists:

Other areas of knowledge